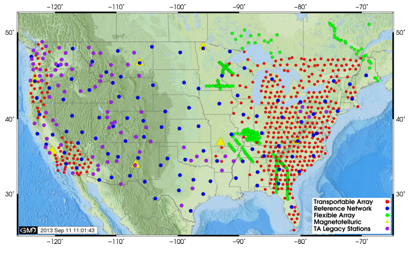 An integral part of the National Science Foundation's Earthscope initiative is the USArray and in particular, the Transportable Array. The TA consists of 400 broadband seismic stations deployed on a uniform grid with ~70 km station spacing. The TA has been rolling across the US since 2004 from West to East with stations occupying sites for 2 years at a time. In 2011 infrasound sensors measuring atmospheric pressure were installed at all new sites. This movie highlights the effect of Hurricane Sandy on ground motion and atmospheric pressure at TA as well as other stations across North America whose data are available through IRIS web services.

The primary background seismic hum of the Earth is called the microseism and is caused by winds in the ocean generating standing waves. The changing pressure from the waves going up and down beats on the ocean floor like a drum. The microseism is composed mostly of Rayleigh waves (a type of seismic wave that propagates on the surface) and is strongest at periods of around 7 seconds. The data in this animation have been filtered around this period in order to highlight the changing strength of the microseism. This movie shows hour long median amplitudes at each station spanning three weeks of data (2012-10-14 to 2012-11-04). Each station typically records many different channels of data. The four panels shown plot 1) vertical ground motion 2) differential air pressure 3) North-South ground motion and 4) East-West ground motion.

The apparent wavefront going from Florida and spreading North and East on 10/26 starting at 13:00 EDT is likely showing changing isoseismic contours indicative the time-varying strength of the microseism being affected by Sandy. The excitation of the stations (changing sizes of the symbols) is unlikely a wavefront passing since Rayleigh waves propagate at velocities of around 3 km/sec. The NE propagating contour has an apparent velocity that is much too slow, only a few hundred km/hour. So this more likely represents the growing intensity of the storm whose seismic noise “reaches” greater distances. During the three weeks plotted, there were many large earthquakes whose amplitudes were orders of magnitudes stronger than the noise levels being highlighted. Their effects have purposefully been suppressed to show the storm's effect on background noise levels.

One can also notice an interesting feature in the upper right panel plotting pressure data on 10/17-10/18 where one can see a propagating atmospheric wave with a source near the NW corner of the USArray (dense station network in the middle of the US). This is likely the cold front that merged with Sandy and turned into the “Frankenstorm”. Typically cold fronts like this one, across which there are pressure differences, travel from W to E across the US. Weather map from 10/18 showing cold front.

Click the image to watch three weeks of seismic and barometric pressure data in under a minute (updated with musical accompaniment):
Or download here

No tags for this page.

IRIS DMC has been certified as a trustworthy data repository by the CoreTrustSeal Standards and Certification Board
Page built 14:28:16 | v.527e06cb