The Global ShakeMovie website at Princeton provides bundles of all calculated synthetics in SAC format for reach event as tar files.

Search for synthetics at IRIS

Events for which synthetics are available in the DMC archive are listed in SPUD.

Original SAC files have been converted to SEED and are available from IRIS using any of the DMC's request mechanisms. Original network codes are not preserved in our archiving, see station lists below.

The IRIS DMC archives and distributes synthetic seismograms from the Global ShakeMovie project (Tromp et. al.) at Princeton University, which are generated for all quick CMTs reported by the Global CMT Project in near real-time. These synthetics are the results of simulations carried out on a large computer cluster. 1D synthetic seismograms are calculated for PREM (Dziewonski & Anderson, 1981) based upon normal mode summation. 3D synthetic seismograms are calculated for S362ANI (Kustowski et al., 2008) and Crust2.0 (Bassin et al., 2000) based on the spectral-element method using the software package SPECFEM3D_GLOBE. General parameters are listed below, see the FDSN instrument description for more details.

The original SAC files are converted to mini-SEED before being archived at the IRIS DMC. Due to the differences in the formats and organization the conversion does not retain all details from the original files and requires some changes, most notably, changing the network code to SY.

Note about overlapping synthetic seismograms:
IRIS may return multiple traces for a given time window if multiple events are spaced closely in time. In these cases, users should ensure that their request start-times include the origin time of the earlier event in order to identify the appropriate trace. For example a time window selected on 2012/08/11 from 12:30 to 12:40 will return two traces with similar start times and trace names from events C201208111223A and C201208111234A, but a request using a time window from 12:20 to 12:40 will have unique start times and trace names.

Synthetics generated before Dec 2011 (events bw ~2009-2011) used a static station list of 1830 stations. Since then, a dynamic station list of about 3000 stations is used which is regularly updated to add any new BHZ stations (e.g. new USArray stations) available at IRIS. Users should be aware that when downloading data from IRIS, the metadata accompanying the synthetics will always come from the dynamic station list. So for synthetics generated before Dec 2011, there may be a slight variation in the IRIS-metadata station Lat/Lon and the station Lat/Lon used when generating the synthetic, though these differences never exceed 1 km.

Note about start/end times:
All returned waveform data from IRIS are pruned at the data sample level (i.e. exact times requested). These synthetic NET=SY waveforms are trimmed at the miniseed level and returned data start/end times may be a few seconds or minutes off.

Note about headers:
Data archived at IRIS is in miniseed format. The Global ShakeMovie synthetics are originally in SAC format. Some header info (e.g. KUSER0) cannot get fully reproduced in the SAC —> mseed —> SAC conversion. Tarballs on from the Global ShakeMovie site have SAC files with fully populated headers. 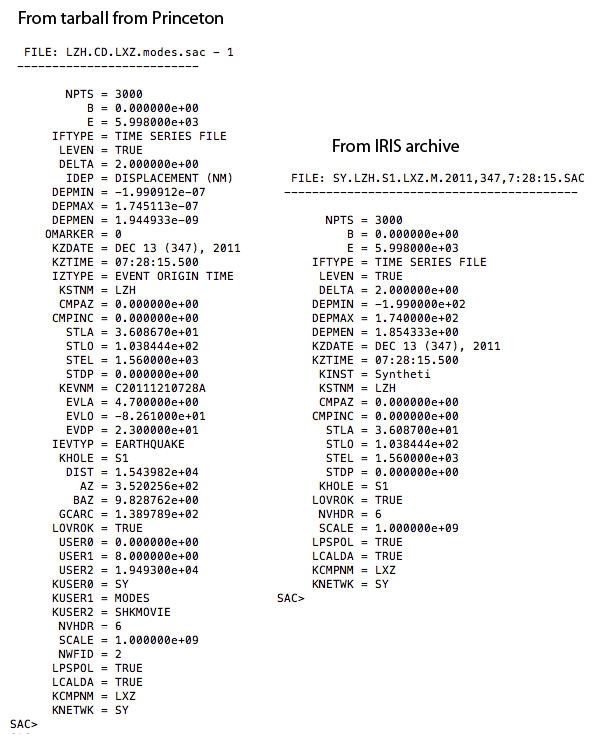 To cite the source of ShakeMovie Synthetics:

To cite the IRIS DMC ShakeMovie Synthetics or reference use of its repository:

To cite the source or reference the use of a particular Synthetic Seismogram:
– select the synthetic seismogram of interest
– click on Citations to obtain its DOI
– insert the DOI in below reference:

IRIS DMC has been certified as a trusted repository by the ICSU World Data System (WDS)
Page built 16:01:41 | v.e7d5ec69