Seismological Facility for the Advancement of Geoscience

What is a "count" in timeseries data?

The data is returned in “counts”:

How does this translate into Earth units?

“Counts” is the raw number read off the physical instrument, ie. the voltage read from a sensor.

Like any physical instrument, a seismometer cannot measure every motion with perfect accuracy. Its responsiveness depends mainly on the frequency of motion being measured, generally represented by a Bode plot: 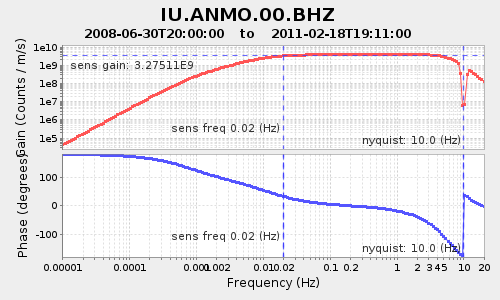 As demonstrated by the plot, converting to Earth units is not a simple calculation but can depend on a number of factors including the frequency of motion being measured. In other words, it is an interpretation of the data, which is something for the researcher (not the data center) to decide.

SAC
See the transfer command. This generally uses a SAC Poles and Zeros file containing the instrument response metadata.
ObsPy
ObsPy can read and write a variety of formats and perform instrument correction.

This is an alternative way of fetching data, that can be useful for single requests.

The IRIS ws-timeseries service has an internal option to perform this conversion while extracting the data:

The additional parameters are:

The full instrument metadata documents the performance envelope of the instrument in as much detail as possible, and should be used for any serious analysis.

But for something like a simple visualization, an approximate solution may suffice:

In this case, the instrument defines a nominal scaling factor, which can be retrieved from the FDSN ws-station service.

Also include in the request:
format: text
level: channel

Processing line 1 of the data…

Note the second line is .05s (more or less) after the first, because the data is measured at 20 samples/second. The data file gives the exact time of the measurement, but in many cases this is an unnecessary level of precision, and the header (and the ws-station data) already indicate the sample rate. In that case, you can use output=ascii1 which gives only the measurement values and not the timestamp. This reduces the data size by about 80%.

The raw data also doesn’t calibrate the zero-point of the instrument — in the first few seconds of data in the example above, the values are all offset by -50000 or so. Demeaning takes the mean across a timeperiod and subtracts it from each value, so that the data is “centered” at zero, which may suffice for some purposes.

IRIS DMC has been certified as a trustworthy data repository by the CoreTrustSeal Standards and Certification Board
18:32:17 v.9a3bf08e