Next: Catalan Seismic Network Data now being shared with IRIS

With the creation of the MUSTANG automated data quality system, IRIS Data Services’ Quality Assurance (QA) team sought to create a new QA process that would leverage MUSTANG metrics in order to

The Alaska Earthquake Center (AEC) staff agreed to help us develop, test and improve this new approach by

First, IRIS and the AEC identified AK reporting needs in a Quality Assurance Cooperative Agreement that describes the channels, reporting period and issue status (resolved or ongoing) covered by the reports. It also listed project contacts at both IRIS and the AEC.

The table below illustrates some of the metrics and time spans returned by automated MUSTANG queries for AK data for the month of January 2017. 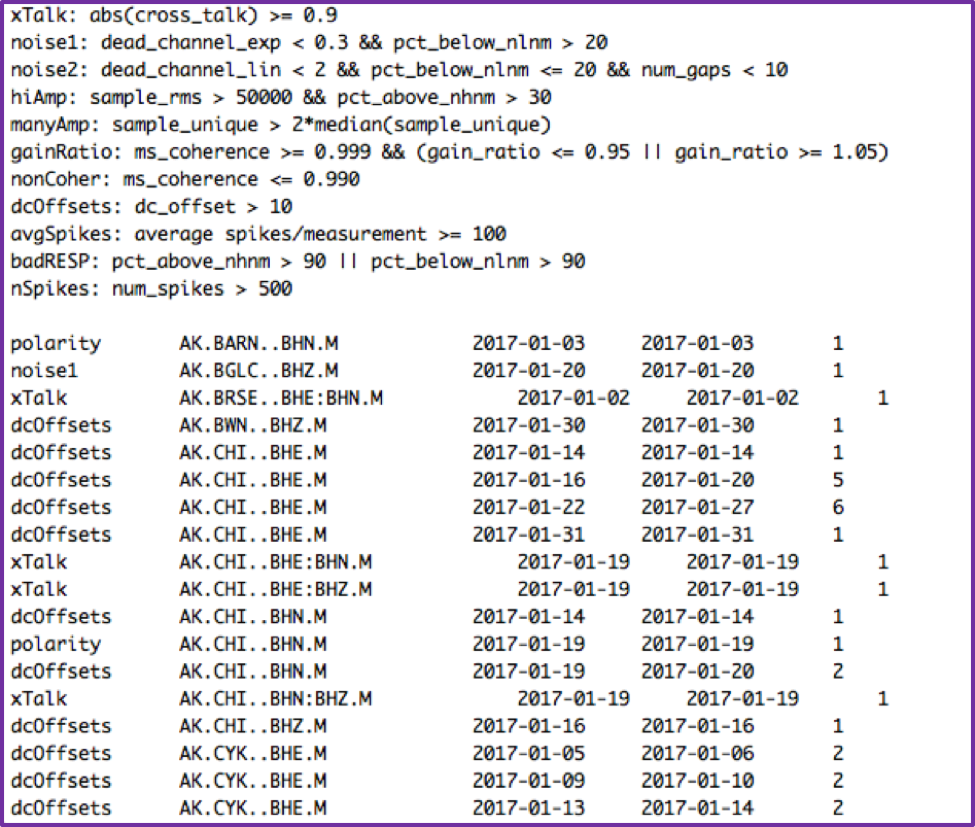 For each confirmed data problem, a ticket was created in our tracking system that includes

As directed by the IRIS-AK Cooperative Agreement, issues that remained unresolved at the end of each report period were parsed into an HTML report and sent to AK network operators (see example below).

“Alaska Earthquake Center (AEC) operates over 100 remote broadband stations located across the state. Assessing state of health of field sites is a responsibility shared by the AEC staff. While AEC maintains its own set of tools and procedures for monitoring data acquisition continuity and data quality, we also make use of external resources such as MUSTANG tools. Monthly network data quality reports produced by the IRIS DMC analysts include additional information regarding data quality issues that are not easily detectable via standard tools available at our disposal. DMC data quality analyst Laura Keyson flagged several data quality issues at the remote sites that otherwise would have been left undiagnosed. This is valuable information that we will be able to use to plan our summer field maintenance visits.”

As we work with Natalia and the AEC staff, we look forward to optimizing these reports and eventually offering this analysis for additional seismic networks.

Next: Catalan Seismic Network Data now being shared with IRIS

IRIS DMC has been certified as a trustworthy data repository by the CoreTrustSeal Standards and Certification Board
Page built 02:28:34 | v.b'108166