SAFOD Data at the DMC 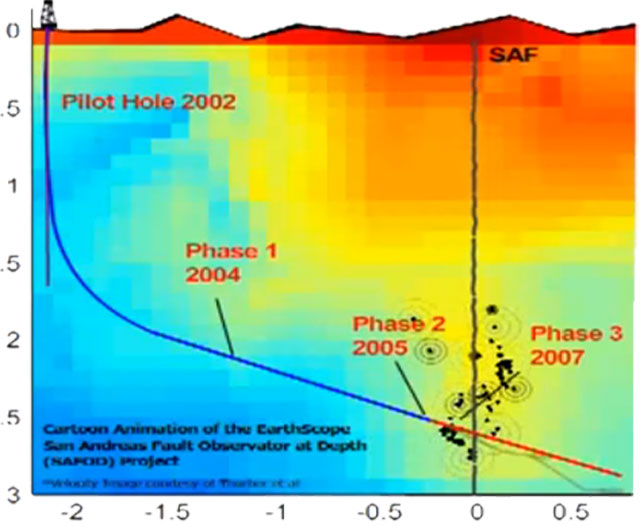 The San Andreas Fault Observatory at Depth (SAFOD) is a deep borehole observatory that will directly measure the physical conditions under which plate boundary earthquakes occur. The SAFOD site is located in the Parkfield region of northern California. Phase 2 drilling began on June 13, 2005.

The IRIS DMC serves as an archive for data from a project conducted at the SAFOD borehole by the company Paulsson Geophysical Services. These data were collected from April 29 to May 11, 2005. This is an array consisting of 240 elements over 80 levels, and recorded at 4kHz. The data was transferred on LTO-2 tape media and stored at the DMC on the tape-based mass storage StorageTek Powderhorn hardware.

There are three basic data sets contained in these recordings.

Requesting SAFOD Data from the Assembled Holdings at the DMC

Search using report no. 05-022 or the nickname SAFOD. This is the main data set described in the Readme file. The total volume exceeds 2 TeraBytes (TB), so you may wish to contact the IRIS DMC first.

The Virtual Event data can be requested using report no. 05-027. SAFOD assembled data is distributed in 2GB tar files, which contain about 34 individual ~16sec shots.

IRIS DMC has been certified as a trustworthy data repository by the CoreTrustSeal Standards and Certification Board
Page built 11:26:38 | v.f89ad02a